Listen to Your Mother 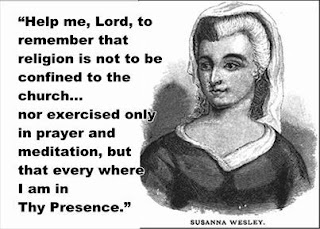 Growing up I would hear these words: “listen to your mother.” Listen usually meant “obey,” and if things were going to go well for me that was usually the best plan of action.  For this Mother’s Day I would say that the “Mother of Methodism,” Susanna Wesley has a few words to say to us during our journey right now. May we listen to that mother as well and follow her good example.
Born in 1669 in London, England, Susanna was the youngest child of Rev. and Ms. Samuel Annesley, a devout Puritan couple who had no less than 25 children.  She grew up in a very religious family, but they also had the kind of religion that was open-minded.  They taught their girls how to read Greek, Latin and French and allowed them to decide what to believe about things.
Susanna compared the Puritan religion to the Church of England and decided to convert to the Church of England.  Religious freedom and equality for women!  Listen to your mother!  How we could benefit from a plurality of thought that allows people to follow their heart around matters of faith.
Susanna married a priest in the Church of England, Samuel Wesley, and they had a tumultuous life, to say the least.  They had 19 children in 20 years of marriage, but only 10 survived to adulthood.  At one point all of them had smallpox. Their parsonage home at Epworth was destroyed in a fire that some believe was intentionally set by a disgruntled church member.
Our founder of Methodism, John Wesley, was almost killed in that blaze but was miraculously delivered by a group of brave men who created a human ladder.  Samuel Wesley spent a good bit of time in debtors’ prison because he was a poor financial manager.  The family also claimed to have had a ghost in the house that was constantly banging things around.  The Wesleys lived through unimaginable hardship and trials.

Through it all Susanna had a strong faith in God that sustained her.  She wrote in her journal “Help me, Lord, to make a true use of all disappointments and calamities in this life, in such wise that they may unite my heart more closely with Thee.” 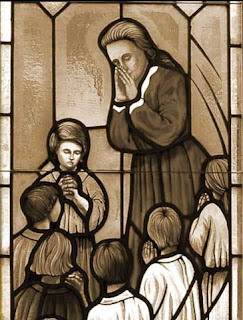 Listen to your mother! The times we are living through now can use a bit of her advice. Offer our trials to God to be used of God and to strengthen our faith.
Susanna was a diligent teacher of her children.  She invented “home schooling,” and like her parents before her, she educated all of her children, both girls and boys.  She taught them reading, writing, history, and various languages but her greatest passion was teaching them about faith in God.
Susanna had a private “spiritual direction” meeting with each child every week.  They strictly read scripture, prayed, observed the Sabbath, fasted and took communion every day.  She taught her children the practice of tithing and helping the poor.  She even led worship in her kitchen when her husband was away to continue her Christian witness to family and congregants.
Susanna followed well the scripture in Deuteronomy 6:7, which says, “You shall teach them (the laws of the Lord) diligently to your children, and you shall talk of them when you sit in your house, when you walk by the way and when you lie down and when you rise up.”
Would that we would be more intentional about Christian instruction of our children in our homes, our neighborhoods and our churches.  Listen to your mother! Our future church depends on the work we do today.  How I appreciate the churches that are providing Sunday school on line right now. Everyone can be ministering to young people in some way. 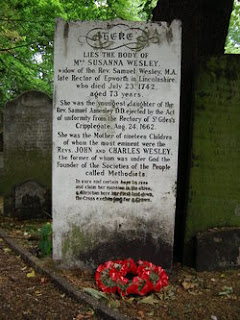 Susanna aged graciously. After Samuel died she would visit with her children, but not staying too long in any one place. She helped John and Charles Wesley in the Methodist revival that was springing up in London.  Often John would come to her for advice and even words of challenge.
She died at age 73 and requested that at the moment of her death, a psalm would be sung.  She died as she lived, in service and praise to God in all the seasons of her life.  May we who are seasoned follow her example of encouragement for our younger leaders in the church.  Listen to your mother!  Experienced voices can assist greatly in the work.
Happy Mother’s Day!  I celebrate this “mother of our faith” but also the many mothers of my faith who led me to the Lord, taught me the Words of Life, and journeyed with me on the way.  The best gift we can give them is to “pay it forward” in our witness and support.

Resources:
For more quotes by Susanna Wesley, visit her page on our UMC General Commission on Archives & History’s website:  Susanna Wesley.
Also:
The One Year Women in Christian History Devotional by Randy Petersen and Robin Shreeves
Susanna Wesley by Eliza Clarke (1886)
Wikipedia: “Susanna Wesley”
Posted by Bishop's Blog at 9:33 AM