‘The Signs of the Times’

A Pastoral Letter from Bishop Peggy A. Johnson 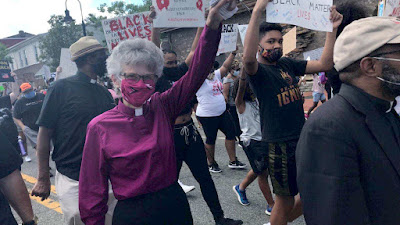 I don’t often take to the streets and participate in peaceful protest marches. However, recently I joined with faithful people in a number of communities to physically show support for the “Black Lives Matter” movement. In recent weeks this has captured the imagination of the entire world and is a powerful and Spirit-filled moment like none other.

As your episcopal leader, I wish to begin by echoing the important words of the Council of Bishops recent letter. I confess to the sin of racism and White privilege in my life and vow to renew my baptismal covenant to “resist evil, injustice and oppression in whatever forms they present themselves.”

I also wish to challenge more of the people called Methodist in the Eastern PA and Peninsula-Delaware annual conferences, the very cradle of Methodism, to take some action.

As I was marching last week in the streets there were various signs and protest cries shouted as we walked along. Together they offer “signs of the times” that can give us some practical “next steps.”
1) Name the Name:

Again and again the marchers named the names of the black people who have most recently been murdered at the hands of law enforcement officers and other assailants: George Floyd, Almaud Arbery and Breonna Taylor. Individual lives are important and precious. “We all bleed red” as one protester said.

All of us are part of the family of humanity under one God. God knows each one of us by name. I challenge my sisters and brothers in the White community to build relationships with Black neighbors. That includes people in your neighboring churches, coworkers and community members.

I did a survey of my close friends a few years ago, and I could see that they were all White. In recent years I have worked on building personal relationships with people of color and it has opened my eyes to much of what our White supremacist society has inflicted on the families of Black people. Build relationships, listen to hearts and hear the experiences of Black people who have had to endure a thousand pin pricks of discrimination and much, much abuse, grief and sorrow.

Many of the posters, t-shirts and chants at the protest march included these familiar words. Some well-meaning but misinformed White people sometimes try to correct this and say, “All lives matter.” But that is missing the point. To say, “Black lives matter” is a recognition of the fact that for centuries in this country Black lives have been treated as a commodity, as “less than,” as deserving of suspicion, discrimination and disregard by the dominant White culture.

Studying the Word of God from the perspective of God’s favor upon all people is vitally important. Through it we learn what it means to respect the giftedness of the vast diversity of humanity. I encourage churches to gather in intentional Bible studies and prayer meetings to study what God will say to us at this important time. There are many good books that can be discussed on this topic as well. Top on my list right now is How to be Anti-Racist by Ibram X. Kendi.

Also, as the Council of Bishops requests, let us pray at 8:46 every morning and evening, praying for 8 minutes and 46 seconds, the length of time of the police officer fatally pressed his knee down on George Floyd’s neck. 3)  “No Justice, No Peace” 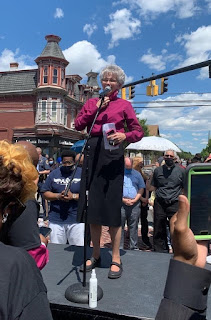 This street chant is likely the most difficult but the most important. This calls us to actively engage in dismantling the systems of oppression. This includes, but is not limited to, holding law enforcement accountable, improving economic opportunities, changing the “mass incarceration” prison system, raising the quality of schools, insisting on equal opportunity in housing, working for fairness in health care systems, and decrying voter suppression.

Individually we cannot do everything but each of us can do something. As a connectional United Methodist Church we can do all kinds of networking, programming, political advocacy and education.

I promise in the months to come to work with conference leaders to engage us in these vitally important ministries of justice. Without justice for everyone there is no peace. The truth that White people often fail to see is that justice for all means healing the wounded-ness of racism. Unless everyone is whole and a part of the beloved community, humanity continues to suffer collectively.

We can learn a great deal at a protest march on the streets. However, I urge White people to take to the streets of your hearts and build relationships, prayerfully study the Word of God and other timely resources, and become involved in advocacy. There just might come a day in the future when we will achieve peace with justice.
Posted by Bishop's Blog at 1:44 PM