The International Year of Indigenous Languages 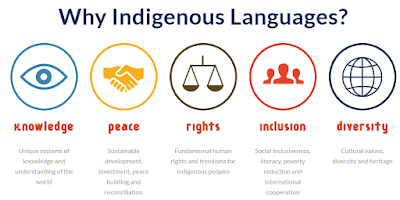 The United Nations has declared that 2019 is the “International Year of Indigenous Languages.” (Check it out on www.en.iyil2019.org).  Studies have shown the following statistics: There are 7,000 languages spoken worldwide (among 5,000 indigenous cultures), 370 million indigenous people in the world, 90 countries with indigenous communities, and a whopping 2,680 languages that are in danger of extinction.


Why is this important?  According to the U.N.,“Languages play a crucial role in the daily lives of people, not only as a tool for communication, education, social integration and development, but also as a repository for each person’s unique identity, cultural history, traditions and memory.  But despite their immense value, languages around the world continue to disappear at an alarming rate.”
Furthermore, the United Nations suggests that “awareness and respect for indigenous languages builds sustainable development, peace, reconciliation, and it is a fundamental human right.”


Christians surely need to take notice if we profess that we are called to “do justice, love kindness and walk humbly before God.” (Micah 6:8)
As the former pastor of a congregation that used American Sign Language as its primary means of communication, I learned quickly the power of language for an individual’s ability to grow personally and professionally.  The “majority” hearing world largely had the upper hand in decision-making settings. The sign-language-user was often forced to accommodate and take a lesser role in leadership and influence.


The same is true for indigenous people and their languages. There is an inequity issue whenever the majority culture uses its language power to control the minority when it comes to the distribution of benefits and opportunities. “English-only” initiatives are oppressive because they tilt power toward the majority and create a “them” and “us” dynamic. This minimizes the giftedness of all people and negates their unique and empowering languages.
The United Methodist Church’s Social Principles speaks loud and clear about social justice (Paragraph 162 2016 Book of Discipline “The Social Community”).   “We affirm all persons as equally valuable in the sight of God…” it states. “We support the basic rights of all persons to equal access to housing, education, communication, employment, medical care, legal redress for grievances, and physical protection.”
As the people called Methodist, we should learn about these precious language issues that are a source of empowerment and equality for our sisters and brothers.  Around the United States Native American tribes are teaching their indigenous languages with faithfulness. They yearn for support and affirmation.

Brett Jackson, a young adult Nanticoke Tribal leader writes: “Tribal language is important to me because it connects me to my ancestors, it teaches me their values and perception of the world, and continuing to use the language is essential to further teach my culture.”
Kesha Braunskill from the Lenape tribe added: “I feel that tribal language is our link to preserving our culture. It’s as important as the responsibility to pass on knowledge and traditions to each generation.  Language is a part of it all.”
More information about this can be found on the “Indigenous Language Caucus” website: http://www.yuchilanguage.org.
Make it your aim to learn a new language this year, maybe an indigenous tribal language, and with it would come a whole new world of culture and community that you have never known before.  Here are a few Native American words for starters:
From the Lenape Tribe of Delaware (permission given by tribal leader Theo Braunskill):
“A’ho” means “Hello”
“Wanishi” means “Thank you”
From the Nanticoke Tribe of Delaware (permission given by tribal leader Mike Harmon):
“Gichtishi Manito” means “God or Great Spirit”
“Eweenetu” means “Peace”
From “Eastern Cherokee Heritage” (permission given by RagghiRain Calentine, chair of the Peninsula Delaware Conference’s Committee on Native CONAM):
“Osiyo” means “Hello”
“Oginalli” means “My Friend”
“Ama” means “Water”
Listen to the beauty of the Cherokee language set to music by logging onto: https://youtu.be/Nf1SdNyB-Wc   This is a translation of the hymn: “There’s Just Something About That Name.”
RagghiRain Calentine is hopeful. “The Cherokee words are passed on from generation to generation.  Our Native tongue isn’t going to be forgotten or lost. Our ‘Mother Tongue’ is waiting for each one of us to speak our own unique language. This is a gift from the “One and Only.”
Posted by Bishop's Blog at 1:20 PM