Our hearts were kidnapped on April 14th along with nearly 300 Nigerian School girls who are being held captive by an Islamic militant organization known as Boko Haram.  The world is crying out for their release and there have been many protests, and cries from the leaders of all major countries are putting pressure on the Nigerian government to do more to bring them home.

Why were they abducted in the first place?  The term “Boko Haram” means “Western Education is forbidden.”  This group believes that girls should not be in school but should get married instead.  They teach that Western education corrupts the moral values of Muslims, especially girls. 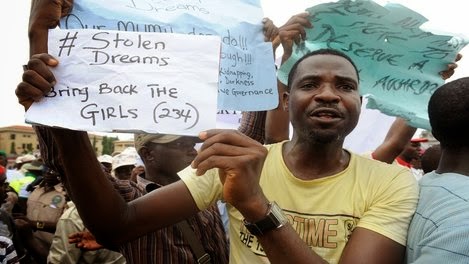 Not long ago in October of 2012 a Pakistani teenaged named Malala Yousafzai was shot in the head by Taliban extremists who had banned girls from attending school.  Amazingly she survived the ordeal and addressed the United Nations at a youth conference last year.  She said “I am here to speak up for the right of education for every child.  I want education for the sons and daughters of the Taliban and all terrorists and extremists.(en.wikipedia.org/wiki/Malala_Yousafzai).

The words of Jeremiah 31:15 came to mind when I attended the “Heeding God’s Call” Good Friday Procession and Vigil:  “Thus says the Lord: A voice is heard in Ramah, lamentation and bitter weeping.  Rachel is weeping for her children.  She refuses to be comforted for her children, because they are no more.”


A group of about 150 people gathered in Sister Clara Muhammad Park to raise a cry on behalf of mothers and fathers who have lost their children and loved ones to gun violence in Philadelphia this year.  There were over 200 T-shirts displayed around the park, one for each of the slain, many of whom were children and young people.  They stood in a silent witness to us as a number of speakers shared their stories.

One mother explained about her 18 year old son, who was shot to death by mistake when there had been an argument at a party.  She said that this senseless killing has caused her and her family to rise up and do something to encourage citizens and lawmakers to get drugs and guns off the streets.

Another woman shared that her son had been killed 25 years ago and she still attends rallies and speaks at schools and gatherings wherever she can to help people understand the importance of everyone doing their part to change things not only in Philadelphia but the entire nation.  Still another mother called on people to stop talking and start a movement that will make a difference.