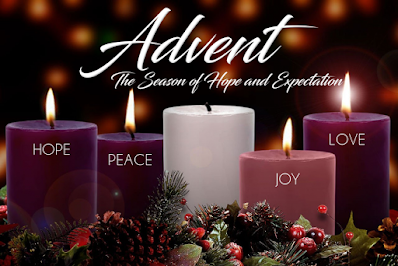 Deacon Jerome Kiel was the only Deaf Deacon in the Roman Catholic Church’s Archdiocese of Baltimore years ago when I was serving as the pastor of an all-Deaf United Methodist congregation.

It was significant that he achieved the office of Deacon because holy orders were rare for culturally Deaf people who used sign language exclusively.  This was true not only in the Roman Catholic Church, but also among United Methodist and other mainline denominations.

Deacon Jerome was a faithful pastoral presence at the “Little Flower” Deaf congregation for many years. He was at the end of his ministry when I was beginning mine, and I appreciated so much his ministerial wisdom and gentle patience with my rookie mistakes.

Back then, the Roman Catholic, United Methodist and Lutheran Deaf congregations in Baltimore offered many shared. ecumenical events, especially during the seasons of Advent and Lent.  Our Wednesday night dinners and worship services gave us a chance to learn about each other’s beliefs and traditions. We had so much in common.

During Advent one year, I learned from Deacon Jerome the meaning of the pink candle on the Advent Wreath.  I was mistakenly taught that it was the last candle to be lit during the four Sundays of Advent and it signified God’s love at Christmas. That was not the true story at all!

Advent began in the 4th century when the church was getting more converts than it could handle because Emperor Constantine had declared that Christianity would be the religion of the Roman Empire.  Prior to that time people preparing for baptism would do so exclusively during the season of Lent. Then they would be baptized and brought into church membership on Easter Sunday. 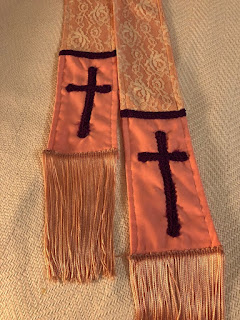 With so many new candidates for baptism, the church needed to offer a second option. That became the season of Advent (prior to Christmas); and baptism would happen on Epiphany Day, January 6..

Because of that, the Advent season was marked as a time of preparatory penance for sin, personal examination and prayer. The liturgical color for sorrow and repentance is purple, as it is during the season of Lent.

Pink (or rose), the color of “joy,” became a part of the Catholic Mass every year on the third Sunday of Advent. The opening missal (a book containing the texts used in the Catholic Mass throughout the year) included the Latin word “Gaudete,” which literally is a command to “rejoice.”  (There was also a designated “pink” Sunday on the fourth Sunday of Lent, known as “Laetare,” which calls for Jerusalem to “rejoice”.)

The church taught that in the midst of this season of penitence and sorrow, there needed to be a reminder about the joy of the Lord.  It was a call to rejoice in the truth that Jesus has come, is with us, and will come again. Nothing can separate us from that relentless love of God.

I thought this was a wonderful thing since pink has always been my favorite color. During the years of my pastoral ministry, I took full advantage of “Gaudete Sunday” with pink bulletins, pink flowers, pink offering envelopes, pink altar cloths, etc. The worship service on the third Sunday of Advent was always a time of rejoicing, second only to Christmas Eve.

Deacon Jerome died one morning after a long illness during the season of Advent.  A box arrived at my church a few months later. In it was an amazing and deeply meaningful gift: Deacon Jerome’s pink Deacon stole. I have kept it as a cherished reminder of this saint who knew the meaning of the joy that comes from serving God with generosity, compassion and love.

This year’s Advent season comes at a time when our church struggles to keep preparations for the coming of Christ at the forefront of our minds. As usual, we seek spiritual introspection while the world is screaming for holiday festivities and non-stop commercialism. 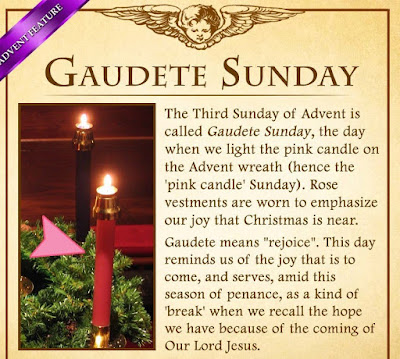 But this Advent season is most unusual, burdened by the threat of more COVID infections, political unrest in our country and theological division in our church. It might be hard to “rejoice” on that third Sunday of Advent when you cannot hold regular Christmas services in the same way due to social distancing concerns. Our cherished gatherings of family and friends are also clouded with concerns and fears of becoming viral “super spreader” events.

“Gaudete” calls us, commands us, begs us to “Rejoice” nonetheless, because when we rejoice even in the midst sorrow, difficulty and uncertainty, it is an affirmation of faith that God is still God.  “Emmanuel” means God is with us.

God will work all things together for good, even when we can’t see our way forward.  When we rejoice something deep within us feels the joy of the Lord that is not dependent on circumstances but rather on that “peace that passes understanding.”

We need Gaudete Sunday more this year than ever.  Light a pink candle in your heart and on your altar. Celebrate the joy of the Lord.  Also, remember to do something to bring joy to someone else whose journey is especially lonely and difficult this year.  Spread the “pink!”  Rejoice!