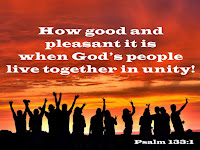 I have always found this tiny psalm to be curious.  The image of sacred oil poured on God’s priest in such volume that is runs down his beard and onto the collar of his holy vestments does not exactly sync with my idea of unity. Get the Kleenexes! Dew on Mt. Hermon also is a puzzling analogy, this gentle water that covers an entire mountain!  What they both have in common is a sense of pervasiveness.  The oil and the dew are in abundance and they both are symbols of the Spirit which hovers consistently over the face of the earth and among all people.

Unity is like that. When people are living in harmony with one another it covers everything that has been divisive, it gets into the crevices of partisan debate and intellectual and ecclesiastical pride. The result of unity is abundance and provision for all.  Psalm 133 says it is a blessing and it leads ultimately to everlasting life.