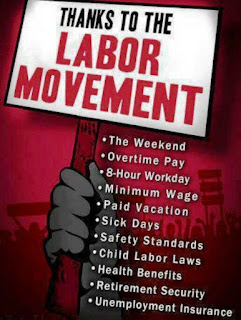 According to the United States Department of Labor, Labor Day, the first Monday in September, “is a creation of the labor movement and is dedicated to the social and economic achievements of American workers. It constitutes a yearly national tribute to the contributions workers have made to the strength, prosperity, and wellbeing of our country.”

Numerous municipalities and states began observing Labor Day as early as 1885; but it did not become an official national-wide observance passed by Congress until 1894. In the early days there were street parades and recreation for workers and their families. There were speeches by prominent leaders and addresses by union leaders.

In 1909 the American Federation of Labor convention declared that the Sunday before Labor Day would be called “Labor Sunday,” and the spiritual aspects of the labor movement would be observed. So, there is a spiritual side but also a social justice side to the labor movement.

Collective bargaining and workers’ rights have long been a part of the spiritual DNA of the people called Methodists. Our Social Principles state: 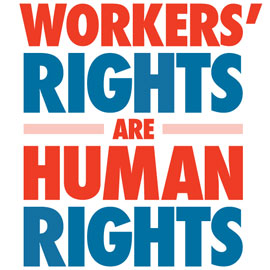 “We support the right of all public and private employees and employers to organize for collective bargaining into unions and other groups of their own choosing. Further, we support the right of both parties to protection in so doing and their responsibility to bargain in good faith within the framework of the public interest.

In order that the rights of all members of the society may be maintained and promoted, we support innovative bargaining procedures that include representatives of the public interest in negotiation and settlement of labor-management contracts, including some that may lead to forms of judicial resolution of issues. We reject the use of violence by either party during collective bargaining or any Labor/management disagreement. We likewise reject the permanent replacement of a worker who engages in a lawful strike.”

I am proud that the history of Methodism has long encouraged collective bargaining and worker’s rights. My own grandmother, born in 1885, was a victim of child labor practices. She had to quit school at the age of 8 and work in a cotton mill in Savage, Maryland, for pennies a day. Our social justice interest in protecting workers had something to do with the change in these child labor laws. 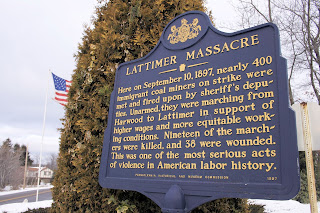 In the history of Eastern PA there was a tragic labor dispute in the Lattimer Mines near Hazelton, PA on September 10, 1897. The history of the Lattimer Massacre recounts a coal miner’s strike in which 19 unarmed miners—mostly of Polish, Slovakian, Lithuanian and German backgrounds—were shot and killed by a county sheriff’s posse.

These miners were subject to harsh conditions in the mines and low pay. It was estimated that 32,000 miners had lost their lives in the late 19th century in these coal mines. By the fall of 1897 some companies were forcing their workers to lease their homes from the mailing company and to see only company doctors when injured.

The September 10 workers strike advocated for better working conditions and pay. After the massacre, the United Mine Workers had a large upsurge of members, and the union became powerful enough to win increases in wages and many safety improvements for the workers. Methodists applauded the labor union movement in that day.

Still today, we need to speak out when workers are not getting a living wage and when companies thrive on the backs of their workers who do not benefit fairly from profits. Safe working conditions, respect, time off and fair wages are important to everyone’s advantage.

As we celebrate the American worker this weekend, through Labor Day, September 4, we need to celebrate the God-given joy of meaningful work and know that all people—workers, management and society—benefit when human rights are guarded and economic justice is promoted. 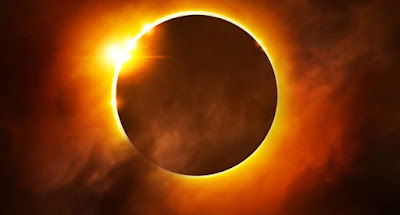 If you haven’t heard we are expecting a “Great American Eclipse” on August 21. The moon will pass across the sun in such a way that the sun will be blocked for a short time. All that many will see is the corona, or crown, of the sun peaking out behind the moon.

This will occur across the continental United States, where we will be able to see varying degrees of darkness, depending on where we live. Those residing in areas along a diagonal path that stretches from Oregon to South Carolina will be able to witness this phenomena in its fullness, with the moon blocking the sun completely. In the Northeast, our view of the eclipse will occur in the afternoon.

A solar eclipse to this degree has not occurred in the United States since June 8, 1918. But there have been many other eclipses through the years.

According to The Scientific American (August 11, 2017), an eclipse is a great opportunity for scientists to study the sun by examining the corona as the moon passes by. That radiant crown is described as “ethereal wisps of superheated plasma.” It can best be seen during an eclipse, although scientists can study the sun at other times as well.

During this brief window of opportunity, “eclipse scientists” will examine the magnetic field of the sun, test next-generation technologies, create thermal maps and learn about the chemistry of the corona and what makes it heat up. All of this must happen in a short span of time. They must be prepared and use their time well.

The Apostle Paul speaks about time in Ephesians 5:16. He encourages us to “be very careful how you live, not as unwise but as wise, making the most of every opportunity because the days are evil.”

Indeed, time, like the eclipse, flies by us, and we must not delay in doing the things that God has called us to do while we have the chance to do them. We do not always get a second opportunity to do that act of kindness, make that contribution, encourage a friend, or share our faith with someone who is struggling. Every delay can lead to more delays, and every lost opportunity is a lost blessing.

What have you been putting off that needs to be done? Who is God nudging you to contact? Don’t put it off. As Jesus said, “As long as it is day, I must do the works of him who sent me. Night is coming, when no one can work.” (John 9:4).

Make the most of your gift of time and precious opportunities today!

How to look at the eclipse without burning your eyes


Sunglasses are not nearly strong enough. Filters made from food wrappers and other household materials? Also a bad idea. Even masks designed for gas welding are not going to cut it.

For the millions planning to watch the Aug. 21 solar eclipse, ophthalmologists say proper eye protection is essential. Staring at the sun — even when three-quarters of it is blocked by the moon, as it will be in much of Pennsylvania and New Jersey — can damage eyesight. Read more
Posted by Bishop's Blog at 9:29 AM No comments: