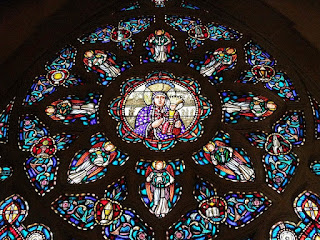 We arrived at my cousin’s grand-daughter’s wedding about an hour early last Saturday.  We drove from our house in Phoenixville to Pittsburgh early in the morning and did not know exactly how long it would take to get there. When we finally found the enormous St. Stanislaus Kostka Catholic Church in downtown Pittsburgh we had plenty of time to explore the grand cathedral. It was ornate in many ways: a high arched ceiling, marble pillars and numerous statues.
The real glory of the building, however, was in the stained-glass windows. Each displayed a picture of the Holy Family, an apostle or some Catholic saint. It has been said that saints have the light of Christ shining through them. Indeed, capturing the afternoon sun, these windows, with their gleaming bold colors, were a luminous feast for the eye. 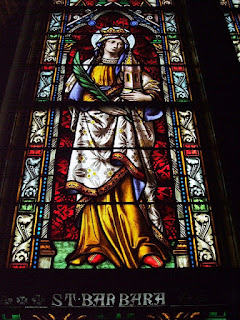 But as I looked at them closely, I felt all that glory was a bit “unreal.”  The lives of these saints depicted in the windows, at least the ones I knew, were not so glamourous and victorious in real life. Their ministries were plagued by struggles, persecution, sacrificial deprivation and martyrdom.
But there they all were in this church sanctuary looking very perfect, bright and cleaned up. Even the statue of Jesus on the cross did not look too terribly gruesome. I’m not being critical really, because for all of this, I am grateful. In this stylized beauty of “life on the other side,” after all the suffering and death, we find the redemptive lesson of the Christian walk.
I Peter 4:12 states “Dear friends, do not be surprised at the fiery ordeal that has come on you to test you, as though something strange were happening to you.”  The Christian life is one of struggle. God’s people are in direct opposition to the powers and principalities of this world; and there will be personal suffering and persecution. It is one of the “givens” in our faith journey.
Joan D. Chittiste is a Roman Catholic nun and writer. In her book Scarred by Struggle, Transformed by Hope, she describes a huge disappointment in her young life, when she was denied by her order the opportunity to study for a Master’s Degree in writing.  Instead she was sent to work at a camp. 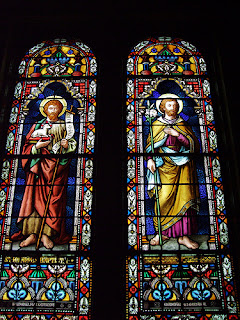 She writes, “Struggle is a fact of life. What we struggle against, what we struggle for, what we with struggle with, all test and hone us. It is the resistance itself that seasons us.” She goes on to even describe suffering as an “unsparing lesson but a necessary gift.” (page 34)
The saints of old knew mighty struggles, and so will we.  The light in the stained-glass windows remind us of the enduring presence of Christ in our lives, even in the midst of struggle. He offers us the radiant light that darkness cannot overcome (John 1:5). And that light reminds us of the final victory we will surely achieve in the next life.
As we prepare for and celebrate All Saints Day, let us keep in mind the worthy saints, that great “cloud of witnesses,” who cheer us on from the resplendent windows of heaven’s balcony, as we struggle down here in the dim shadows below.


View images of the windows and other sacred items of St. Stanislaus Kostka Catholic Church in downtown Pittsburgh on their Flickr page.
Posted by Bishop's Blog at 10:06 AM No comments:

Praying for our Presidential Election

It seems that I can’t remember a time when we as a nation were not talking about the 2016 U.S. Presidential election.  Almost the minute the 2012 election ended, the speculation about the next President began.  One by one, people came forward announcing their candidacy.

Then there were the endless debates, rallies, primaries, conventions, and now more debates. The relentless stream of repetitive news, survey polls and opinions about our major nominees crowd the full media spectrum. And there’s more than enough scandal, mud-slinging and speculation, much of it fueled by leaked, once-secret e-mail messages and videos.

Campaign fatigue set in for me a long time ago. But I have not given up my concern for our nation, nor my hopes for the best and my prayers for God’s grace as we choose our next POTUS and Commander in Chief.

Called to be the salt and light of the world

As followers of Jesus Christ we are called to be the salt and light of the world, not just the church. The next President of our country can cast a vision and offer an agenda for the future of this nation like few people on earth.

We are called to work for good in this world, along with our governmental leaders, and to call our nation to seek righteousness and pursue justice for all. I ask you to pray every day for this election.

I Timothy 2:1-2 says “I urge, then, first of all, that petitions, prayers and intercession and thanksgiving be made for all people, for kings and all those in authority, that we may live peaceful and quiet lives in all godliness and holiness.”  Please pray for the next president every Sunday at worship and also in your personal times of prayer.

Also I remind you that United Methodist pastors and leaders should not advocate for any particular candidate, publically or privately.  Everyone should vote as they feel led to vote. Our constitution’s principle of “separation of church and state” forbids us from promoting one party or candidate over another.

That said, responsible Christians are called to study carefully the platforms and policies of the candidates, so they can prayerfully make careful decisions on Election Day.

Finally, be sure that you do cast a vote. Voting is an incredible right that our form of government affords us. Many people on this globe have no such option. Find no excuse to stay home on November 8; and if you cannot physically be present, cast an absent-tee ballot now.
Posted by Bishop's Blog at 4:30 PM No comments: