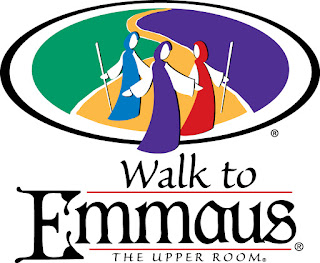 The Emmaus Walk retreat is like a little walk with Jesus for three days.  Christians gather for talks, small group discussion, communion, singing and praying.  The team leading the event and the wider Emmaus community spend many hours preparing for these weekends, which they also cover with intensive prayer.

Recently I attended the closing service of an Emmaus Walk held at Camp Innabah.  The faith-sharing of the women who attended was heart-warming.

Emmaus Communities offer follow-up gatherings for prayer and praise and encourage every member to become part of a small group to continue developing one’s walk with Jesus.  An Emmaus Walk is not intended to replace the ministry of a person’s church or to compete with its programs or mission.  It is not a secret club.

Folks attending a weekend can continue in the movement or just have the one time experience.  It aims to help the participants experience the unconditional love of God, and that experience can be life transforming.
Many people who are entering the ordained ministry felt their calls on an Emmaus Walk.  I experienced a call to the episcopacy at an Emmaus Walk Sponsor’s hour in 2007. So as a former pilgrim and now an advocate and leader, I support the Emmaus Walk movement.  And I appreciate the discipleship growth that comes from it and the many leaders it calls forth from its ranks.

Find out more about the powerful Emmaus Walk experience, ministry  and movement through the United Methodist Upper Room.
Posted by Bishop's Blog at 3:30 PM