Deuteronomy 10:19 reminds us, “You shall also love the stranger, for you were strangers in the land of Egypt.”

Have you ever been a stranger and found welcome? I remember the overwhelming welcome I received when I arrived in Congo a few years ago on a mission trip. The people there greeted me with singing and smiles and food and a place to stay. I will long remember the gratitude I felt in my heart at this wave of hospitality.

Sometimes loving the stranger is not so easy. Some strangers seem…well, strange. We teach our children to be careful and not approach or talk to them. It’s part of exercising safe, common sense. But there’s an uncommon sense—indeed, a spirit—of fearless grace, of welcoming ministry that moves those who do daily acts of simple kindness and friendliness for strangers.

Our Christian call to hospitality, to loving the stranger in our midst, comes to a difficult place when we deal with the issue of immigration in the United States. Some feel that strangers need to be welcomed only if they come to our borders through the proper channels of immigration. There are many, many people living in our country without legal documentation; and some of them are in the care of our immigration services. 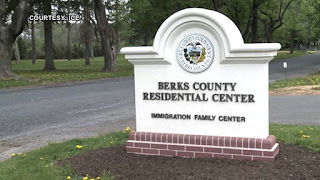 Such is the case with the undocumented Central Americans in the Berks County Residential Center near Reading, located in the Eastern PA Conference. Last week there was a candlelight vigil held by the community to shine a light on this situation, in which a number of undocumented immigrant women and children have been detained there for almost a year.
This is one of three family detention centers in the U.S. where people await court dates or asylum hearings. News coming from this center tells us about mothers who are on a hunger strike, children having thoughts of suicide, and an alleged rape in the facility by one of the employees. According to TheGuardian.com psychologists and pediatricians who visited Berks report symptoms of depression, behavioral regression and anxiety.

To love the stranger means perhaps writing a letter to the Berks County Commissioners or to President Obama to ask that the process be streamlined. It might mean visiting these families to show support for them. It can also mean praying for our country as it sorts out the enormously complicated immigration process so that we can move forward in healthy and productive ways.

Deuteronomy reminds us to love the stranger BECAUSE we were strangers at one time. It is indeed the Golden Rule to do unto others as we would have people do unto us. Out of gratefulness for the freedom and comforts we have, should we not reach out in care and concern to love the stranger?

PS: Here is one benevolent act of care and concern you can show to love a stranger, simply by sending birthday greetings to one of the Berks Madres. Read on:


Immigrant Mother and Son Both Celebrate Birthdays in Deportation Jail 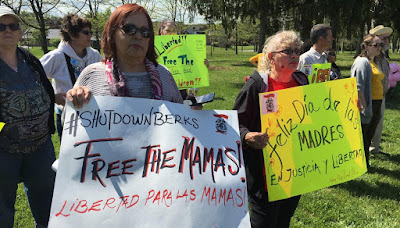 SEND A BIRTHDAY MESSAGE: Today an unbelievably courageous and strong young mother turns 23 years old in detention. She and her 6 year old son have been held in detention now for 380 days and counting. Her son already had a birthday in detention. With no party, no piñata, no photos to commemorate entering into his 6th year. Only a birthday cake that could only be bought through the county for which they charged Karen $70.00.

Because she is vocal, the government labeled Karen 'disruptive' and took the unprecedented step of trying to transfer her and her son to yet another detention center in Karnes, TX in order to isolate them. Thankfully, the judge denied that request.

I have set up an email account for those who want to send Karen Happy Birthday messages. It is felizcumpleanosberks@gmail.com. Oh and it can be in English or Spanish because she has learned English too.

Please let her know you are thinking of her and that you will be vocal in demanding that she, her son, and all of the other Madres Berks get released and no one has to spend another birthday in prison!

Photo courtesy of Forward Together.
Posted by Bishop's Blog at 2:01 PM