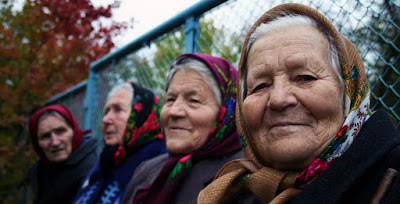 Recently I had lunch with two United Methodist pastors from Russia who are visiting some of their supporting churches.

The place of the church in Russian in the 21st century is better than in the past when the Communist revolution swept into the country. But according to the Christian Science Monitor, Russia has emerged nowadays as the most God-believing nation in Europe.

The missionaries I spoke to credit much of this to the Babushkas*, who kept the faith alive during the state-sponsored repression. They were the grandmothers, with head-scarves and wrinkled faces, who were dismissed and ridiculed by the Communist leadership because of their religious belief. But they refused to give up their faith and kept it alive in secret and through their witness.

As we think about mothers during this Mother’s Day weekend we need to reflect on the faith that women, mothers and grandmothers often bring to a godless world. Often it is the quiet voice that is the most tenacious and strong. I give thanks for those faithful women in Russia who never gave up on their faith in God.

Never underestimate the power of your faith, even when you are seen as insignificant, misguided or old-fashioned. It will strengthen, sustain and save you in the end, giving you victory when all else fails and has fallen away.

*Babushkas are literally head scarves worn by Russian women that cover most or all of the top of their hair and heads, leaving their faces uncovered.

For another testimony about the faithfulness of the Russian, Christian women often called Babushkas, read the Christian Forum blog post "Thank God for the Babushkas."
Posted by Bishop's Blog at 12:58 PM