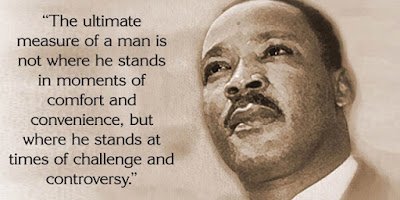 In a blog post titled “Ten Things You May Not Know about Martin Luther King, Jr.,” by Christopher Klein, published April 4, 2013, we read some interesting facts about the great civil rights leader who changed the world forever.

For example, I never knew that his birth name was “Michael” but was later changed to “Martin Luther” after his father went to Germany and learned about theologian Martin Luther’s pivotal Protestant Reformation work.  King’s father legally changed his own name as well.  The renaming was perhaps a premonition of the groundbreaking work that young Martin was later to accomplish. 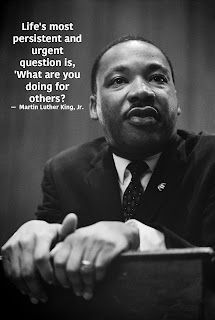 I did not know that Dr. King started college at the age of 15, or that he survived a near-fatal assassination attempt by a woman who stabbed him with a letter opener in a department store.

I did not know that King’s mother was assassinated in 1974 by an armed intruder during a Sunday worship service while she was playing the organ. How did I miss this?  Church shootings are not new, although they are still rare. But they are becoming more common and more deadly. That tragic trend, as reported in our news media, makes them feel new to many of us.

On and on Klein’s article goes, offering amazing facts about the life of a man whose legacy continues to shine the light of truth and courage, of freedom and justice. Only that light can dispel the shadows of deception, cowardice, injustice and oppression that still enshroud our nation in its mistreatment of people without privilege or power.


The thing that I was not surprised to read was that King was arrested 29 times for his faithful social justice work.  Be it civil disobedience, or trumped-up arrest charges, or something as trivial as jail time for driving 30 miles per hour in a 25-miles-per-hour zone, Dr. Martin Luther King, Jr. was no stranger to prisons and jails. 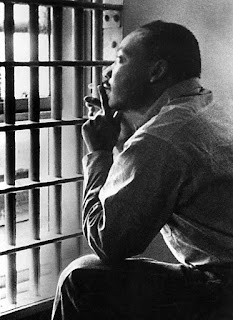 Still today, “truth” is often put in jail. “Power” is not pleased with the concept of equality. To unleash that value on the world is an affront to those who hold all its authority and privilege.

The crucible of incarceration gave King time to write important letters and to pray. But it also no doubt steeled his determination to keep doing the work. Indeed, his imprisonment was in itself a glaring example of the injustice he was confronting.

Still today, people are put in prison unfairly; but often it is the very impetus that spawns liberation. Consider that word “impetus.” It is defined as “the force or energy with which a body moves” or “the force that makes something happen or happen more quickly.”

Former South Africa president and anti-apartheid revolutionary Nelson Mandela used his 27 years in prison to become a force of deliberate wisdom that unleashed the firepower for a whole new way of life—of truth and reconciliation—for all his people.  King’s frequent imprisonment did the same.

I am reminded of the Apostle Paul’s assertions in 2 Corinthians 4 of overcoming similar adversity and frequent imprisonment to spread the truth of Jesus Christ’s gospel: 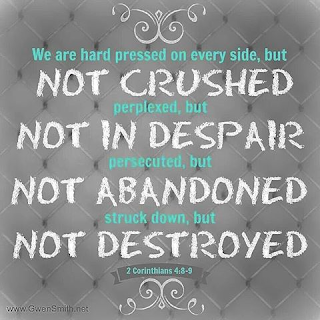 “We are afflicted in every way, but not crushed; perplexed, but not driven to despair;  persecuted, but not forsaken; struck down, but not destroyed; always carrying in the body the death of Jesus, so that the life of Jesus may also be made visible in our bodies.” (v. 8-10)

How many times would I be willing to be imprisoned for my convictions, for my mission to spread truth and advocate for justice? How can we work to make our law enforcement and prison systems more equitable for people of color and for people who are doing the sacrificial work of promoting human rights?

These are thoughts I ponder on the birthday of Martin Luther King, Jr.  I thank God for his courage and his voice that continue to challenge us and help shape and inspire our world. And in my thanks, I am reminded, as we all should be, of Paul’s opening words in that chapter: “Therefore, since it is by God’s mercy that we are engaged in this ministry, we do not lose heart.”
Posted by Bishop's Blog at 12:40 PM