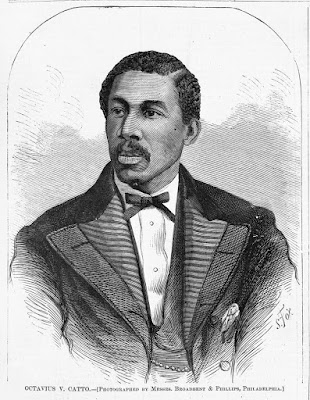 On September 26, 2017, a statue of Octavius V. Catto—who lived from February 22, 1839, to October 10, 1871—was erected in Philadelphia in the southwest apron of City Hall. It is the first statue of an individual African American to rise among the city’s 1,700-plus statues of white people.

This great leader was shot in the back Oct. 10, 1871, at age 32, the night before a closely contested mayoral election, according to John N. Mitchell, writing in the Philadelphia Tribune (Sept. 22, 2017).  Catto was a civil rights advocate before the phrase was coined; and in his young, abbreviated life he accomplished twice as much as most people.

He fought for desegregation of ridership on the city’s horse-drawn streetcars. He transformed the Institute for Colored Youth (the only school for Black children) into one of the best schools in the city. He served as a Major in the National Guard. 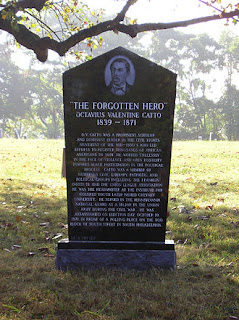 Most notably, Catto came alongside the iconic civil rights icon Fredrick Douglass to fight for the abolition of slavery and the right for African Americans to vote. This energetic, dedicated visionary also worked tirelessly to assist newly freed slaves who arrived in the city in search of a better life.

His life was taken as a result of his support for a progressive mayoral candidate. There were tensions between the African Americans and the large Irish American community at that time. Many police officers were of Irish heritage, and some were found to have interfered with African Americans trying to vote.

Catto was the third person to be murdered during this election. His assassin was not tried for the heinous crime until five years later but was acquitted by an all-white jury. 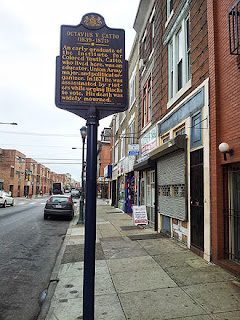 Catto was the son of freed slaves, his father a Presbyterian minister. He was raised to believe in the equality of all people and to work for this cause despite persecution. Catto had a vision for a better day to come, one that we are still trying to realize nearly 150 years later. He said, “There must come a change, one now in the process of completion, which shall force upon this nation not so much for the good of the black man as for our own industrial welfare.”

Isn’t that the point of civil rights?  It is not just for the good of oppressed people struggling for freedom. It is for the benefit, the welfare of all. There is only true peace in this world when there is justice that allows everyone to benefit from that peace.

The majority race and culture is in dire need of the giftedness, the leadership and voices of people who are in the numerical minority, who are too often marginalized. But some erroneously think that by sharing power and influence they will lose. This losing, privileged attitude is born of the sin of bigotry and a crippling fear of scarcity. The truth is, only when everyone is seated at the table—the “welcome table”—can everyone have a chance at the best that life has to offer.  And God’s best is truly there waiting for us in abundance, if we would but open our closed eyes, minds, hands and hearts. 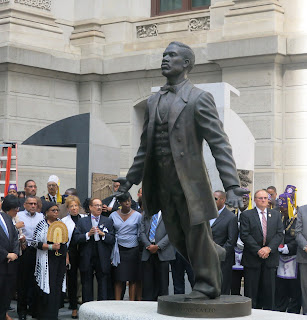 Yet, the battle wears on in our generation. It is imperative—today as much as ever—that we continue to work together, peaceably but persistently, and yes, sacrificially, to achieve equality and justice for all. To do so is to turn our claims of emulating Christ’s love into real action—for as Christ tells us, there is no greater love than to lay down one’s life for another. (John 15:13)

This is holy work. The heroic stories of those in the “cloud of witnesses,” those who have gone before and given their lives for others and for justice, should inspire us all to try harder, to do better.

During Black History Month 2018 I honor the vision and valiant sacrifices of Octavius V. Catto. I am grateful that Philadelphia, this self-described “City of Brotherly Love,” finally has a statue of him for all to see. Take time this month to go visit this hero and learn his story. And let him and others like him inspire your story as well.
Posted by Bishop's Blog at 3:14 PM